The amazing paintings in this art pack playing cards Piatnik have stood the test of time and the vagaries of fashion. The most important European artists, schools and styles are represented in this Piatnik deck. These art playing cards by Piatnik with 54 beautiful paintings offer a nice balance between renowned icons such as the Mona Lisa by Leonardo da Vinci, the sunflowers by Vincent van Gogh, the Girl with a Pearl Earring by the Dutch master Johannes Vermeer, Belshazzar’s Feast by Rembrandt van Rijn and lesser known masterpieces.

The great paintings featured on these playing cards belong to the world’s finest public collections and museums. The superb photographic archive of The Bridgeman Art Library in London in the United Kingdom has made these faithful reproductions possible.

Since 1824, Piatnik has been making the best playing cards in the EU in Vienna, Austria. This also includes this beautiful art pack with 54 masterpieces of Western painting. The art pack celebrates the genius of the world’s greatest painters, from Michaelangelo to Monet. The 54 masterpieces on the face cards of this beautiful collector’s pack offer a unique introduction to western painting, and will enliven every card game.

Playing cards with photographics of paintings from the finest collections and museums in Europe and the United States:
With images on the faces of the playing cards of paintings from large collections and museums such as: the Louvre and the Musée d'Orsay in Paris in France, the Gemäldegalerie in Dresden in Germany, the Kunsthistorisch Museum in Vienna in Austria, the National Gallery London, the Victoria and Albert Museum and the Wallace Collection in London in the United Kingdom, the Pitti Palace and the Uffizi in Florence, the Gallerie dell'Accademia in Venice in Italy, the Sistine Chapel in the Vatican, Museum of Art in Toledo, Museum of Fine Arts in Boston, Institute of Arts in Detroit, the Metropolitan Museum of Art in New York in the USA, and from private collections. On the back of these art playing cards you will find an impressionist painting of the Japanese bridge and the water lilies from 1899 by the French painter Claude Monet, this masterpiece by Monet is now hanging in London in the National Gallery museum.

This art pack playing cards Piatnik has 54 cardboard poker size playing cards with a standard index in 2 corners of the playing cards and 2 Jokers are included. This masterpiece card game from Piatnik is produced in the European Union and distributed by Piatnik from Vienna, Austria. 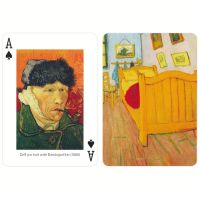 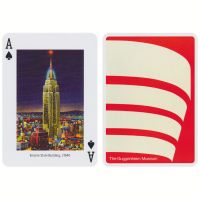 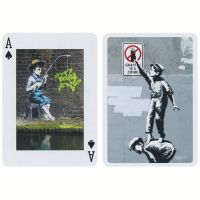 Banksy Playing Cards Piatnik
€5.49
Categories
Compare Products
Compare
Clear All
You have no items to compare.
Sign up for our FREE newsletter!
Newsletter