In the name of his murdered parents, playboy billionaire Bruce Wayne wages an eternal war against the criminals of Gotham City.
He is revenge. He is the night. He's Batman.

Buy these Batman playing cards from DC Comics and Cartamundi now via the Internet at the #1 playing card store in Europe, playingcardshop.eu!

About Batman
Batman is a DC Comics superhero created in 1939 by cartoonist Bob Kane and writer Bill Finger. The cartoon character Batman first appeared in Detective Comics # 27. Bob Kane got the idea for a bat man through a drawing by Leonardo da Vinci of an ornithopter, an ornithopter is a plane that flies by flapping wings like bats do.

Batman, one of the most iconic fictional characters in the world, has dedicated his life to an endless crusade, a war against all criminals in the name of his murdered parents, who were taken from him as a child. Since that tragic night, he has trained his mind and body near physical perfection to become a self-made superhero. He has developed an arsenal of technology that would put most armies to shame. And he's collected teams from fellow DC Super Heroes like the Justice League, the Outsiders and Batman, Incorporated.

A playboy billionaire and CEO of Wayne Enterprises by day, Bruce Wayne's double life offers him the comfort of a life without financial worries and the perfect base in the ancient network of caves beneath his family's sprawling estate. At night, however, he lets go of all pretensions, dons his iconic scalloped cape and pointed hood and drives through the shadowy streets with his car the Batmobile and walks on the rooftops of Gotham City. Together with his right-hand man Robin and a loyal butler Alfred Pennyworth, they fight organized crime in Gotham City. The Dark Knight's main opponents are the Joker, the Penguin and Catwoman. 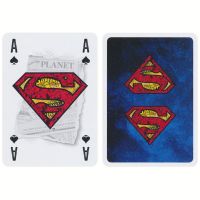 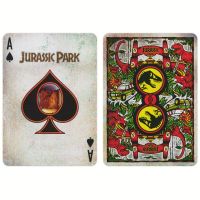 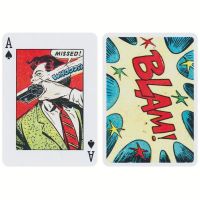 Comic Art Playing Cards Piatnik
€5.49
Categories
Compare Products
Compare
Clear All
You have no items to compare.
Sign up for our FREE newsletter!
Newsletter